Don’t Have Time to Read the Bestselling Book on Feedback? I gotchu. 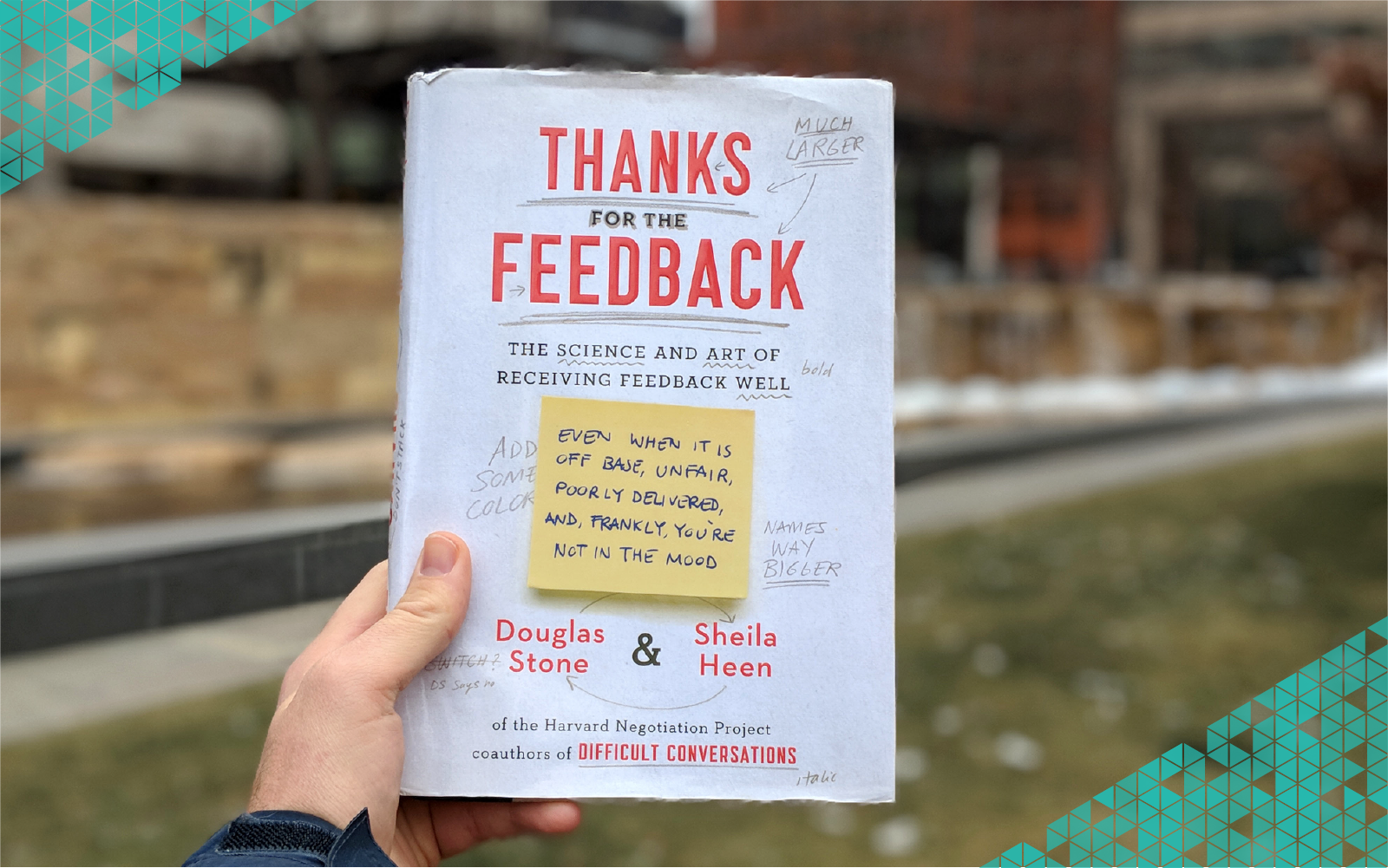 No matter what project you’re working on, no matter what role you have, and no matter how long you’ve been doing it, giving and receiving feedback is important. This isn’t really an earth-shattering idea nor does anyone deny that. But despite the fact that everyone claims to know how important feedback is... we never really get taught how to do it and quite frankly we’re often afraid of it. This was the main reason I was so excited to read the book called “Thanks for the Feedback: The Science and Art of Receiving Feedback Well” by Douglas Stone and Sheila Heen. And my quick feedback on the book is that it doesn’t disappoint.

Douglas and Sheila are both lecturers on Law at Harvard Law School and cofounders of Triad Consulting. They’ve worked with some pretty big time players like the White House, Citigroup, Honda, Johnson & Johnson, Time Warner, & Unilever. So yeah, they’ve got some experience working with big players and getting feedback from important people. They decided to take their experiences and break it down into an easily digestible and comprehensive look at giving and receiving feedback. Here are my 8 takeaways from the book.

The book begins by taking a look at how humans and feedback have evolved together. One of the important aspects that sets humans apart from other animals is our natural curiosity and desire to learn new things. This means that we should love feedback. It’s helping us learn new things! Right? Yes, but then how come we don’t? That’s because there’s another force - our desire to belong in the herd - that we’ve been programmed to follow. This second force is in direct competition with our desire to learn. Humans are social creatures and when we receive negative feedback, we take that as a sign that we don’t belong. So don’t feel badly if you’re conflicted about asking for feedback, we’re wired that way.

Lesson #2: The Most Important Role in Feedback is the Receiver.

This might sound obvious but there are actually two parties involved in the feedback process: the giver and the receiver. Douglas and Sheila make the argument that the most important party involved is the receiver. The reason is that it’s the receiver's responsibility to understand the feedback. This means that if you’re the one looking for feedback you can’t blame the giver because you disagree with what they say (which we all do sometimes ); it’s your job to figure out what that person meant.

On top of the receiver's responsibility to understand the feedback, it’s also their job to choose what to do with the feedback. And while I can definitely hear some of you out there crying - ‘That’s not true! My boss tells me what to do.’ - we have to strive to remember that at the end of the day the person asking for feedback is the person doing the work, so they’re in control. Don’t let the HiPPOs (highest paid person’s opinion) boss you around!

It doesn’t matter how much authority of power a feedback giver has; the receivers are in control of what they do and don’t let in, how they make sense of what they’re hearing, and whether they choose to respond.

Lesson #3: It’s Important to Know the Three Triggers That Block Us From Great Feedback.

Lesson #4: [Preventing the Truth Trigger] Understand What You Don’t Agree With.

We’ve all gotten feedback that we think is wrong. Sometimes this feedback is simply not true, but Douglas and Sheila say more often than not, it actually is true; we just don’t understand it. In order to prevent the Truth Trigger, we must first make sure we truly understand the feedback before we evaluate it. What caused the person giving the feedback to think this way? What do they see that we don’t? We have to keep asking for more information and follow up with them in a different setting if we still don’t understand or agree with it. Additionally, as part of this understanding process, we have to take a look at our own actions. During our presentation maybe we left out a crucial piece of information or maybe we offended someone at the beginning so they responded emotionally. Looking at our own actions can help us get on the same page.

Before we determine whether feedback is right or wrong, we first have to understand it. That sounds pretty obvious, but in fact, we usually skip understanding and dive in with instant judgements.

Lesson #5: [Preventing the Relationship Trigger] Understand your relationship with the giver.

This one’s a biggie. In every feedback conversation, there’s a dynamic between you and the person giving you feedback. They may be the CEO or they might be the summer intern.  Or maybe they are the coworker that always rubs you the wrong way. But just because we don’t like someone or just they don’t have much experience, that doesn’t mean their thoughts are wrong. In order to stop this kind of bias, we have to be honest with ourselves and understand how we feel about the person giving us feedback. When we understand our own biases, we can work to overcome them.

Lesson #6: [My favorite one!] Avoid ‘switchtracking’

In the Relationship Trigger portion of the book, Douglas and Sheila bring up a concept they call ‘switchtracking.’ I actually think this concept is so important and broader than just relationships that I think it should be its own trigger. Switchtracking happens when you’re discussing one point of feedback, but then another point sneakily worms its way into the conversation before the first one is resolved. So at this point, you’re talking about two different issues in one conversation. And it often doesn’t stop at just two issues. With so much going on, it’s difficult to sort through the feedback. After being introduced to this concept, I can’t tell you how often I see it happening - which is why I’m so grateful for the solution they advise. In order to stop ‘switchtracking,’ you must immediately pause the conversation, alert everyone to the different issues you’re talking about, and then steer the conversation through one issue at a time.

Lesson #7: [Preventing the Identity Trigger] Understand the difference between you and your work

Let’s say you’re an architect, and you identify with being thoughtful towards people with disabilities, but then in a feedback session, someone says that you didn’t consider accessibility in your building plans implying that you don't care about people with disabilities. This would strike at your core. You don’t want your colleagues to think of you this way! So you shut down, and stop asking for more feedback. This is when you need an attitude adjustment. You have to remember that people are critiquing your work, not you. Making this attitude change moves you from fixed mindset to a growth mindset. With a growth mindset, you begin to be aware of your emotions during feedback sessions. Sometimes you’ve just had a crappy day, and that’s okay, but know that this negative attitude could affect how you respond; so put aside the feedback and wait to respond when you’re feeling better.

As feedback receivers, we are always sorting feedback into coaching and evaluation bins. Your choice of bin makes a huge difference in your ability to take feedback productively. The reason is this: while identity is easily triggered by evaluation, it is far less threatened by coaching.

Lesson #8: Make a Plan and Close the Loop

The final portion of the book is full of more great insights, it’s not as organized as the other three sections. My main takeaway from the end was that the receiver needs to clearly communicate what they’re going to do next. This might be turning down the feedback, deciding that they need to get more information to figure out what to do next, or deciding to make the changes that the giver suggested. This sounds pretty straightforward, but with so much feedback coming at you, it’s easy to forget.

Overall, the book was a really great read. It was full of both new ideas and actionable takeaways that I’ve already implemented in my own feedback process. My only major complaint with the book was that, at times, it felt a little too focused on the individual feedback process without really tackling how to get better at feedback at the organizational level. With that being said, its in-depth look at feedback is by far more thorough than any other book I’ve read on the topic. If your job involves receiving feedback on a weekly basis (which most do in some fashion), I would definitely recommend picking up a copy of this book. There were definitely more concepts that I didn’t have time to cover in the post. Lastly, I’ll leave you with my favorite quote from the book:

Effective assertion hinges on a key mindset shift: You aren’t seeking to persuade the giver that you are right. You’re not trying to replace their truth with your truth. Instead, you’re adding what’s ‘left out.’ And what’s most often left out is your data, your interpretations, and your feelings.